Apply for a job? 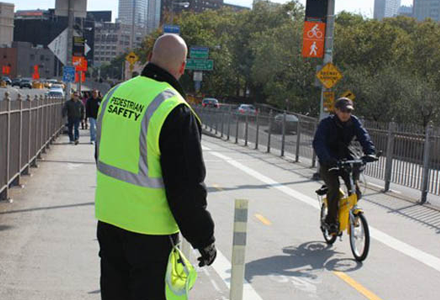 A traffic guard, traffic controller, flagman, or flagger is a person who directs traffic through a construction site or other temporary traffic control zone past an area using gestures, signs or flags. The person directing traffic is responsible for maintaining the safety and efficiency of traffic, as well as the safety of road workers, while allowing construction, accident recovery or other tasks to proceed. Traffic guards are commonly used to control traffic when two way roads are reduced to one lane, and traffic must alternate in direction. Their duties are to direct traffic to safer areas where construction,accidents, and severe traffic are taking place. In addition they have to moderate the traffic density to not cause traffic jams. They guide motorists to follow the traffic laws; but mayn ot be able to enforce the law. Most traffic guards are seen as construction workers; but in some nations, they dress or perform as security guards and police officers.

Traffic guards are employed on highways and expressways. They are trained to set up warning signs and barricades to slow down the speed of traffic in a temporary traffic control zone. Some areas have full-time traffic guard teams for responding to incidents that could risk the safety to motorists. When they are on scene they will set up equipment to warn approaching traffic about the incident.

If construction or maintenance is occurring in an intersection and a law enforcement officer is not used to direct traffic, a traffic guard would control the intersection instead of

the traffic light or signs.

Traffic guards who are directing traffic during road construction would maybe block a lane on the road and direct the motorists to merge with another lane. If the road is two

lanes and traffic flow moves both ways then one lane will be closed and the traffic guards will direct the traffic to take turns in crossing this area. They would stop one way of

traffic for a time till some traffic from other way could pass and then they switch turns.

Traffic guards who are stationed at a crossing with no signal or placed for extra safety at a junction. They stop pedestrians and vehicles from crossing a junction where another thing has the right of way to cross.